As it was in other parts of the country, the earliest Italian immigrants to Des Moines came from northern Italy in the 1870’s to escape a life of poverty. Once here, many of them established small businesses in the growing city. It wasn’t until after 1900 that the large wave of southern Italian immigrants arrived in Des Moines.

One of these early immigrants was Luigi Jacopetti. Born in the village of Vergemoli, located in the Tuscany region of Italy, Jacopetti arrived in Des Moines in 1879 and established a repair shop, later located at 316 Grand Avenue. At his shop he repaired umbrellas and antiques, and sharpened scissors and knives. His display window contained umbrella handles of every description, antiques of various kinds, saws and other tools, and cans of pure olive oil. Even when he was well into his seventies, one could look into his store window and see the short old man with white hair and moustache bending over a rusty saw, grinding away at its dull teeth.

Despite having one of the larger families in the Italian colony, Jacopetti found the time to help establish several social organizations for the Italian citizens. Along with Joseph Amedeo and Pietro Tambura, he founded the Stemma d’Italia Society in 1897. In 1904, assisted by others, he helped form the Guiseppe Garibaldi Society. He was also a charter member of the Columbus Club, formed in 1930.

His fame grew in the community in the late 1920’s when he received a large amount of publicity from the American Citizen newspaper as the “discoverer of Des Moines” for the Italian people. As the oldest original Italian immigrant, Jacopetti was presented a gold watch by publisher Anthony Sarcone on Columbus Day, 1929 in honor of the 50th anniversary of the first Italian settlement in Des Moines.

Jacopetti’s fame was used in advertisements by several businesses in the American Citizen. In ads for the Utica apparel shop, a photo of Jacopetti was displayed along with the claim that he bought his first suit at their store in 1879. The Iowa National Bank also claimed that Jacopetti was the first Italian to use their bank when he deposited his first paycheck there soon after his arrival in Des Moines.

His social life was also frequently recorded in the American Citizen. He attended many dances where he was sought out by the younger ladies in attendance. During the height of the Depression, it was well known that he owned a V-16 Cadillac, which he often used for weekend jaunts with his friends.

Jacopetti was very active in many Italian American civic affairs. In 1932, he was the first member of the Italian community to sign a petition to make Columbus Day a legal holiday in Iowa. The petition was to be presented before the state legislature the following year. It eventually passed in 1935.

By this time, he was the oldest living Italian settler of Des Moines. As such, the younger generation of Italians, along with others in the city, had found him to be an invaluable source of information concerning the early history of Des Moines.

On October 24, 1933, tragedy struck when Jacopetti was hit by a car while walking from work to his home at 1513 Bluff Street. Suffering from injuries that included a fractured skull and two broken legs, he died at Broadlawns General Hospital soon after the accident. He was identified by the watch he was wearing – the same one presented to him in 1929 on the Golden Anniversary of the Italian settlement in Des Moines.

The entire Italian American community in Des Moines mourned his death. As one of their earliest settlers, Luigi Jacopetti had arrived with little in his pockets. By the time of his death, he had become the symbol of the success that was attainable through hard work, perseverance, and service to the community. 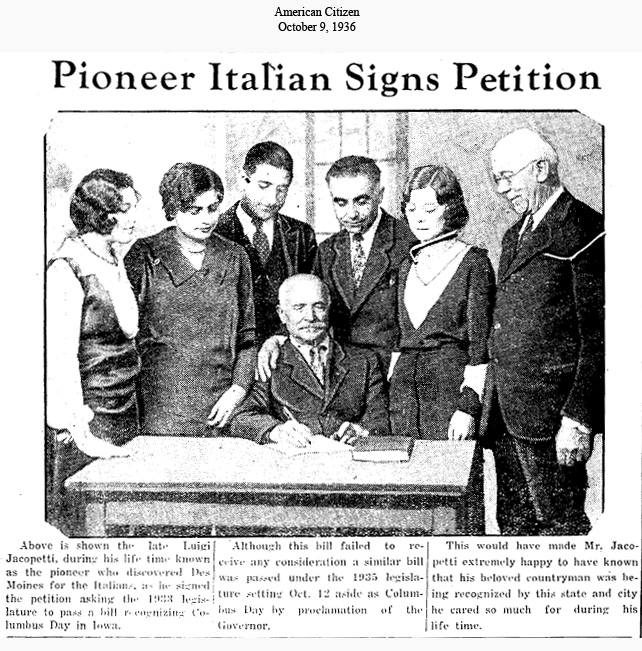 Story based on articles from the American Citizen.