Anthony “Tony” L. Sarcone once joked that when he came to Des Moines in 1905, the only English he knew was “522 Elm Street” – his brother’s address. The feeling he experienced being a stranger in a new land led him to a life dedicated to organizing and encouraging the Americanization of the Italian immigrants of Iowa.

Tony Sarcone was born in Crucoli, Italy on March 1, 1884. He worked on the railroad when he first came to Des Moines. From 1910 – 1914, he managed a shoe store. He then went to work for the city’s health department, where he served through World War I and until 1928.

Sarcone is best known as the founder of the Sarcone Publishing Company. He first published the weekly Italian language newspaper Il Risveglio (The Awakening) in 1922. In 1925, he changed the name of newspaper to the American Citizen. During the late 1920’s the newspaper gradually converted from Italian to English, mimicking the Italian immigrants’ own language transition.

In the 1930’s, Sarcone was extremely active in civic and cultural organizations. As a member of the Stemma D’Italia, he publicized many of the activities and accomplishments of the Italian social club. He was also zealous in his pursuit of honoring Christopher Columbus. He founded the Columbus Club, which was instrumental in legalizing Columbus Day as a state holiday, renaming a park on the south side of Des Moines as Columbus Park, and erecting a monument for Columbus on the state Capitol grounds.

Though extremely proud of his Italian heritage, Sarcone was also very passionate about the ideals of his adopted country. He dedicated a significant portion of his newspaper encouraging his readers to pursue American citizenship. He published preparatory materials for those studying for their citizenship, provided information on naturalization classes, and proudly reported on those who recently became Americans.

In June of 1940, Benito Mussolini declared war on England and France. Despite having three nephews in Mussolini’s army, Sarcone demonstrated his patriotism towards his adopted country when he wrote the following front page banner in his newspaper:

The name of this newspaper, the American Citizen, stands for exactly what it says. Therefore as American citizens, we deplore and condemn the slaughtering of innocent people in Europe by the ruthless dictators whose aggression and havoc on the world must be stopped forever by the democracies.

Sarcone was also very active in his Catholic faith. Although officially a member of St. John’s parish, he could often be found at church dinners and bazaars of his many adopted parishes. He always found space in his paper to promote any church-sponsored activity. If he couldn’t go himself, he’d still buy tickets and pass them on to someone he thought would enjoy the event.

Tony Sarcone passed away on October 6, 1964 at the age of 80. His obituary appeared in the Columbus Day edition of the American Citizen – ironically the annual issue that he loved best. His funeral Mass was co-celebrated by priests from St. Johns, St. Anthony’s, St. Augustin’s, and St. Joseph’s parish of Winterset. Due to the throngs of persons who came to pay their final respects, two rosary services were held. He was buried at St. Ambrose cemetery.

Sarcone never forgot his Italian roots and was instrumental in maintaining the ties between his native Calabria and his adopted city of Des Moines. After his death, a Solemn High Requiem Mass was celebrated in the town of his birth, Crucoli, where St. Peter’s Catholic Church was filled to capacity with residents, not only of Crucoli, but of the surrounding communities.

For a man who knew little of America when he arrived in Des Moines, Tony Sarcone helped pave the way for thousands of other Italian immigrants who followed the same path. In his obituary, the American Citizen noted that “to many Italian immigrants in Des Moines, Sarcone was their first friend. His newspaper was for them – printed in their language – so that they might not feel alone in this strange new land.” 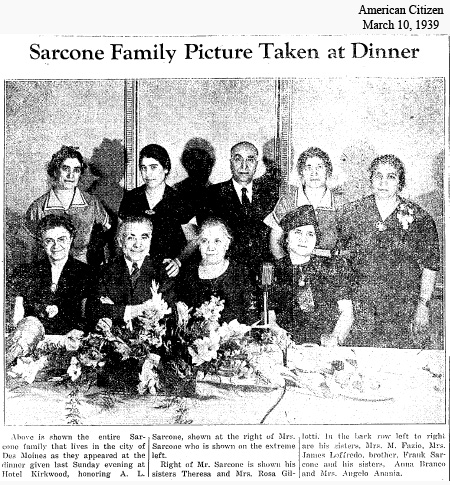