History of the Society of Italian Americans Club

On April 27, 1898, a group of Italian men in Des Moines, Iowa gathered together at one of their homes to discuss the possibility of organizing a society that would benefit both them and their families. There were hundreds of American organizations doing benevolent and charitable work, but these Italians hesitated to join because of their difficulty with the American language. Timidity held back those who could speak English. It was important, then, that this mass of foreign speaking, but American thinking individuals should band together and form an organization that would serve as an outlet for the charitable impulse and at the same time create for them a social atmosphere that would make their lives in their adopted country more important, pleasant and profitable. 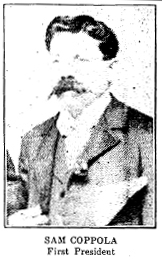 The name Societa Stemma D’Italia, Mutuo Soccorso (Mutual Assistance) was adopted, which name signifies the main purpose of its functions. The articles of incorporation signed in April 1898 were based on true brotherly spirit. “The particular and principal objects of the said Society are for the benevolent and charitable purposes to aid and secure the members in case of need and practice benevolent and charity work to all.”

Following the adoption of the articles of incorporation, officers for the organization were elected. Samuel Coppola was made the first president. Gabriele Scarpino was elected vice president, Vincenzo Fraracci, vice secretary and Giuseppe Bianco, Secretary. Giuseppe Amodeo was voted Treasurer and Giuseppe Comito and Domenico Cichilli, Revisori dei Conti.

On August 19, 1915, another Italian society, the Figli D’Italia lodge, was organized with Giuseppe Longo as president and Thomas Renda as secretary.

On February 28, 1932, the two lodges unified and retained the name of the Stemma D’Italia lodge. The merger brought the total membership of the group to 250 men, climaxing a long period of hard work by members of the society to form one strong organization to support the best interests of the Italian people of Des Moines. 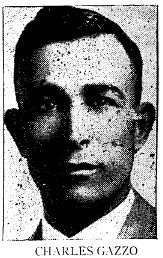 Also in 1932, under the leadership of its president, Cataldo “Charles” Gazzo, the Stemma D’Italia lodge purchased Garibaldi Hall from the Garibaldi Society, which dissolved around that time.

For the next several decades, the Stemma D’Italia lodge flourished and grew. They sponsored annual Italian festivals that drew crowds in the thousands. They supported each other, worked with the community to dedicate a Columbus memorial on the State Capitol grounds, erected a monument to honor fallen World War II soldiers from the Italian community, and attended the funerals of fellow members who had passed away.

Another group, the Club of Italian-Americans was formed in 1976 to fulfill a need for young men of Italian descent whose fathers were not Italian to have an organization to promote and preserve their heritage. Because only their mothers were Italian they were not eligible to become members of the Stemma D’Italia Lodge. The 137 young men who were charter members of the newly formed club were led by President Thomas A. Renda; vice president John P. Civitate; Secretary John Amodeo; and Treasurer Armand Gazzo.

Realizing that there is strength in numbers, members of the aging Stemma D’Italia and the Club of Italian-Americans joined in a merger. Papers of incorporation were filled out on May 1, 1994. The combined group named itself the Society of Italian Americans.

Also involved in the merger were the ladies of the Society of Italian-American Women and the Stemma D’Italia Auxiliary.

One hundred and eleven years later, the Society of Italian-Americans is comprised of 240 men and 140 Auxiliary members – some original Italian immigrants, others 1st, 2nd, 3rd, and even 4th-generation Italian-Americans. They still band together in a social atmosphere to support each other, improve their community, and preserve their precious Italian heritage. Through strong leadership and the continued activism of its members, they plan on being around for another 111 years.