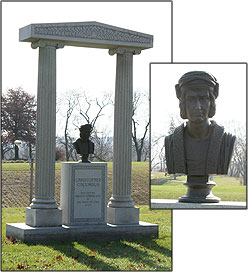 This year on Columbus Day, there will be memorial observance in front of the Christopher Columbus Monument on the south lawn of the Iowa State Capitol. It is doubtful that the crowd that attends this year’s ceremony will come close to matching the five thousand who swarmed the same lawn at the original dedication of the monument on Columbus Day, 1938. The dedication of the monument capped the twenty-year vision of one man and a two-year effort by the Des Moines-based Columbus Club and Italians across the entire state of Iowa.

The Columbus Club, an active local chapter of the National Italian-American Civic League, was actively pursuing the veneration of their group’s namesake. In 1935, they were triumphant in lobbying the state legislature to officially recognize October 12 as Columbus Day in Iowa. The following year, they successfully dedicated the Columbus Park (formerly the Walker Park) in South Des Moines. To culminate their efforts, the club’s vision included the erection of a suitable memorial statue of Columbus to be located at Columbus Park. 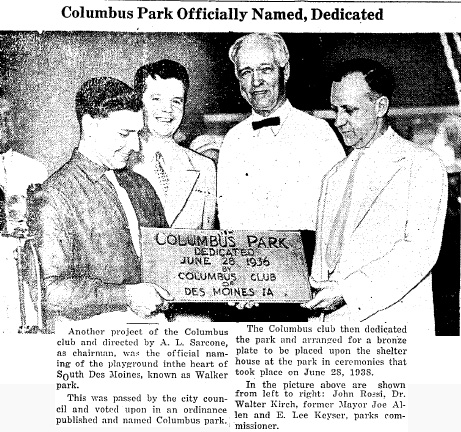 Prior to 1936, however, business conditions were too poor to begin organizational work to raise funds for a memorial. Yet despite the weak economy, the ambitious members of the Columbus Club decided it was time to form a memorial committee. They named Anthony L. Sarcone as the chairman of the committee. Sarcone, the local publisher of the American Citizen, the Italian-American newspaper in Des Moines, dreamed of dedicating a Columbus memorial in Des Moines for almost twenty years – now he finally had the chance to fulfill his aspiration.

Sarcone began by traveling the state interviewing progressive Italians and enlisting them in the project to raise funds for the memorial. He received enthusiastic response from all parts of the state, including Granger, Centerville, Mystic, Sioux City, Davenport and Council Bluffs. He also received the support of Cav. Uff. A. Castigliano, the Royal Italian consul from St. Paul to Des Moines. St. Paul, like other major cities in the Midwest, had recently dedicated a Columbus memorial on the Minnesota state grounds, despite opposition from many Scandinavians in the state.

On April 18, 1937, a dinner meeting was held at the Stemma D’Italia Hall in Des Moines to discuss ways and means for raising funds for the memorial. A blanket invitation was sent to all prominent Italians throughout the state. Over four hundred Italians, representing the cities of Des Moines, Council Bluffs, Albia, Waukee, Madrid, Davenport, Mystic, and Centerville, attended the meeting and pledged over $1,000 towards the memorial. In addition, letters from representatives in Granger, Oelwein, Fort Dodge, Sioux City, and Mason City were received expressing the wholehearted support of their towns’ Italian representatives. The Italian-American groups in the Des Moines area, including the Garibaldi, Figlia D’Italia, Societa’ Vittoria Italiana, and the Stemma D’ Italia, pledged to bond together to work on the project. 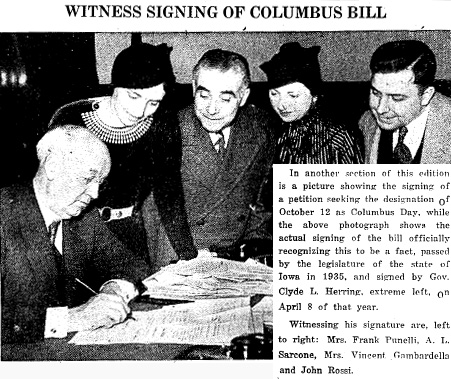 Honored speakers at the meeting included Cav. Uff. Castigliano and Cav. Fred A. Ossanna, president of the National Italian-American Civic League. Cav. Ossana, an eloquent speaker, remarked that the Iowa monument and all monuments to Columbus were “more than memorials in bronze and granite – they are the spirit of a movement that will go through the years.”

By Columbus Day of 1937 funds had been collected in the amount of $1,030.55. Sketches of the memorials were submitted to the committee by some of the country’s best designers and sculptors, but it was decided that none would be selected until the memorial fund had enough money to pay for the monument in cash upon delivery.

Over the next 12 months, the Italian communities throughout Iowa announced pledges towards the campaign. Many non-Italian individuals and groups also donated to the fund, including one man of English descent who contributed because he “had a warmer feeling for Italy on the Ethiopian conflict than the stand England had taken.”

Anthony L. Sarcone was relentless in publicizing these contributions and promoting the monument fund campaign in the American Citizen. Frank Cortesio of Mystic Iowa, chairman of the fund committee in southern Iowa, was singled out as one who had “done more to date than any other one individual on the committee, working constantly for the fund.”

Sarcone and other leaders on the committee continuously travelled the state by train in order to solicit additional funds. By June 10, 1938, the memorial fund totaled $1,226.00. The financial goal of the committee is unclear today, but by July of 1938, it was announced that due to extremely poor business conditions, it seemed doubtful that the statue would be unveiled by Columbus Day. Still, the committee planned a vigorous fall campaign with the goal of having every pledge to the fund paid by the October holiday.

The threat of possibly missing the financial goal and the unveiling of the statue on Columbus Day must have provoked a burst of contributions to the campaign, because by late August, over $2,000 had been collected – the equivalent of over $31,000 in today’s dollars. More contributions were expected, and the committee felt comfortable that they would now have the funding necessary to erect the monument without debt. 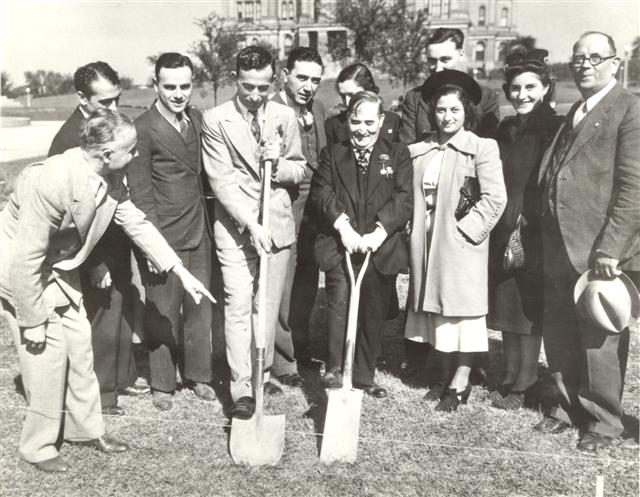 Plans for the dedication ceremony began. Because the memorial was made possible by contributions of Italians across the entire state, it was decided that the monument should be located on state grounds rather than in Columbus Park as originally planned. Normally an act by the state legislature would be required to approve the placement of the memorial on the capitol grounds, but the attorney general’s office intervened and ruled that by acceptance of the executive committee, it could be erected there.

A site was chosen on the south side of the capitol, just east of the Soldiers and Sailors monument. A ground-breaking ceremony was conducted on September 23rd and the Glendale Memorial Company of Des Moines began construction of the monument. The cast bronze bust of Columbus selected for the memorial was commissioned to an Italian sculptor.

Columbus Day, 1938 began with a parade from Seventh and Locust Streets to the state capitol grounds where Anthony L Sarcone opened the dedication ceremonies. Over five thousand guests from across the state were in attendance at the ceremony, which was broadcast over radio stations KRNT and KSO. Sarcone expressed how pleased he was to see his twenty-year dream finally become a reality. He credited the fine work of the committee and the dedication of Italians statewide in contributing to the project. Sarcone then presented Melio Tonini, chairman of the dedication ceremony, who declared that the statue of Columbus paid “just tribute to your first Italian-American, who made possible this movement in a truly democratic republic – the greatest in the world.” 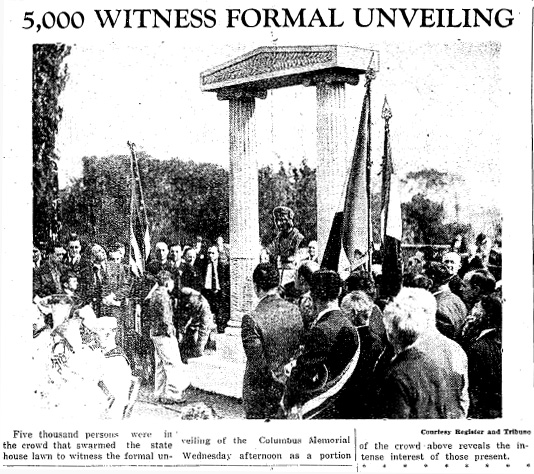 Finally, while the Woodward State Hospital Band played “Stars and Stripes Forever”, Anne Gianni and Mary Crivaro pulled the cords revealing the monument. It consisted of two columns of granite which framed the bronze bust of Columbus. Governor Nelson G. Kraschel accepted the memorial gift on behalf of the state of Iowa. In his speech, Governor Kraschel stated: “I am only a symbol speaking for the state and we all join you in being proud of the fact that your countrymen played such an important part in the establishment of government on the North American continent. Your people have also played an important part in the social life of our state and we of the state of Iowa take pride in your lot in life and are grateful.” After the governor’s speech, Monsignor L.G. Ligutti of Granger blessed the memorial.

From those who could not attend, hundreds of letters of congratulations were received, including telegrams from such dignitaries as Mayor Fiorello LaGuardia of New York, Mayor Robert S. Maestri of New Orleans, and Mayor Angelo J. Rossi of San Francisco.

Following the ceremony, over six hundred people packed the Hotel Fort Des Moines for a banquet celebration. Cav. Fred A. Ossanna reminded the crowd about the day’s events and the real reason we honor Columbus. He said, “The soft warm rays, reflected in the sun light from the dome of your capitol, were bright in the eyes of those attending the dedication and I could even see the rays permeating the eyes of the bronze bust of Columbus, framed by the magnificent columns of granite. In these eyes, though gentle, set in a face that was grave but determined, shone the purpose and courage and very persistency which qualifies the great.”

Information for this story was gathered from articles written in the American Citizen newspaper from 1936 to 1938. Click on photos for larger views.